We endeavour to support – rather than subvert – current workflows, build essential new infrastructure to address critical modeling gaps, and guide integration of high-performance computing resources to enable new physics capabilities. The guiding philosophy of AToM is to take a bottom-up, collaborative approach that focuses on leveraging and integrating the wide spectrum of existing research activities throughout the US fusion community. In this way, we seek to improve and extend the US fusion program’s existing, mission-critical integrated modeling capabilities. 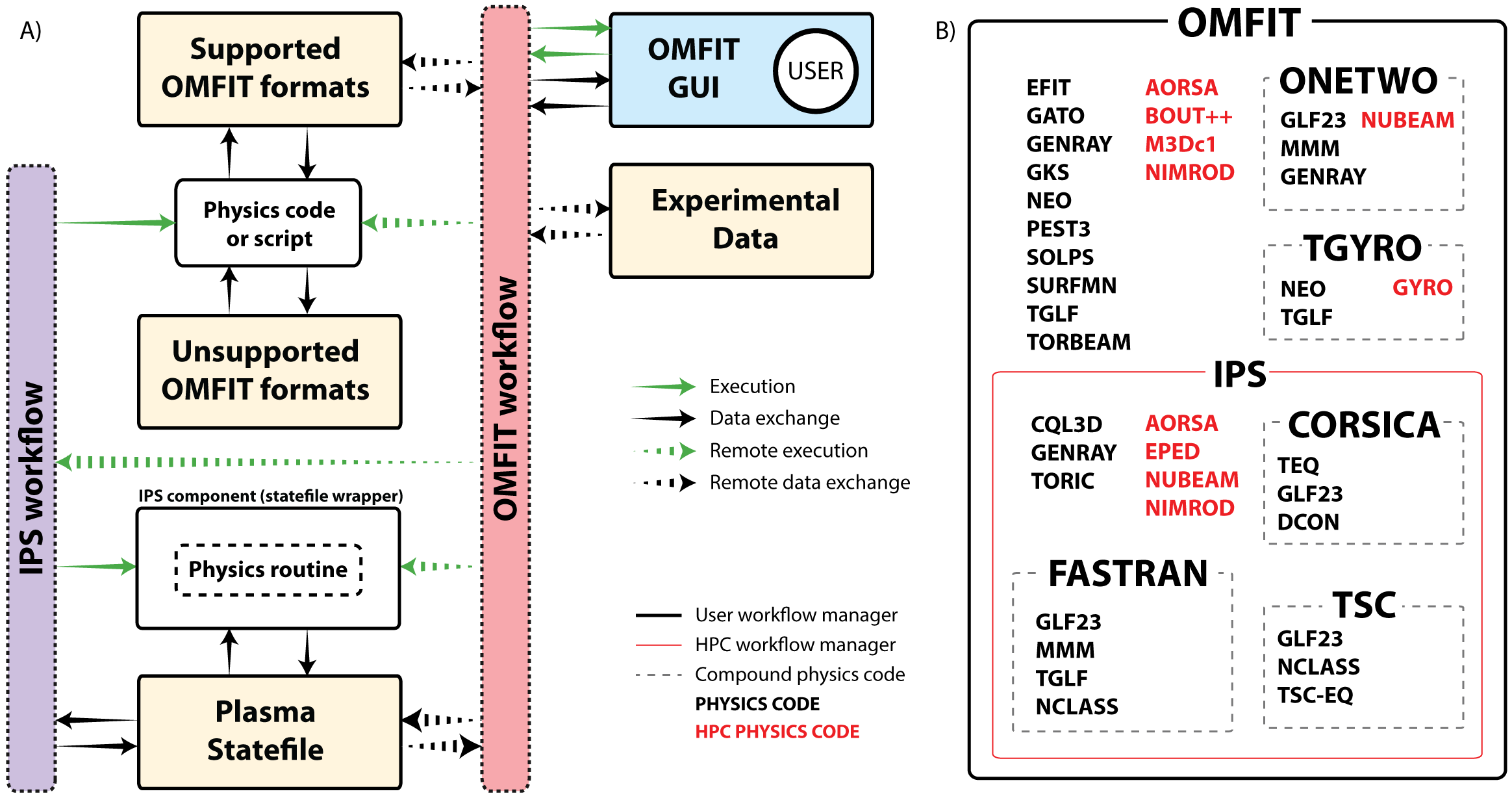 OMFIT is a software developed at General Atomics to support integrated modeling and experimental data analysis of magnetically confined thermonuclear fusion experiments. The goal of OMFIT is to enhance existing scientific workflows and enable new integrated modeling capabilities. To achieve these goals OMFIT adopts a bottom-up collaborative development approach. Today the framework is used worldwide by over one hundred fusion scientists.

IPS (Integrated Plasma Simulator) is an environment to orchestrate complex coupled simulation workflows on parallel computers. The IPS is designed primarily for use in a batch-processing environment, with a batch job typically comprising a single invocation of the framework, calling the individual physics codes many times as the simulation progresses.

GYRO is an Eulerian gyrokinetic code. Unlike the various US PIC codes (GTC, GTS, XGC1, GEM) full gyrokinetic electron dynamics and compressional electromagnetic effects are treated. In terms of efficiency, even for simple problems, GYRO is also far ahead of PIC solvers with much lower time-to-solution for a given problem. Both the MPI implementation, and the more recent OpenMP directives, are highly optimized in GYRO. The OpenMP in particular was reoptimized by IBM and the changes that improved performance at NERSC were retained. Sensible GYRO runs required at most 20K cores, but typically (say for ITER) will probably use about 512-2048 cores. The direct coupling scheme in TGYRO can use about 16*4=64 instances, which brings the TGYRO core count to over 100K cores.

COGENT is a continuum gyrokinetic code being developed at LLNL for edge plasma modeling. The present version of the code models a nonlinear (full-F) axisymmetric 4D gyrokinetic equation coupled to the long-wavelength limit of the gyro-Poisson equation. There are two configuration dimensions: labels of flux surface and poloidal angle, and two velocity-space dimensions: parallel velocity and magnetic-moment. The code is distinguished by the use of a fourth-order finite-volume (conservative) discretization combined with arbitrary mapped multiblock grid technology (nearly field-aligned on blocks) to handle the complexity of divertor geometry with high accuracy. COGENT has a variety of collision options including the fully nonlinear Fokker-Planck (FP) collision model. COGENT is built upon the Chombo adaptive mesh refinement library, which is under development in the FASTMath SciDAC Institute (LBNL). In more detail, COGENT exploits mapped multiblock grid technology, whereby the inner and outer closed flux surface regions, the inner and outer scrape off layer, the inner and outer divertor legs, and the inner and outer portions of the private flux region are mapped from the physical toroidal geometry (with appropriate metric information) onto communicating rectangular grid blocks. The code was ‘’born parallel’’, with grid blocks assigned to groups of processors. Phase, configuration and velocity space can be domain decomposed independently for flexible and efficient mapping to current and future parallel machines. The code gets single-null geometric data via fourth-order interpolation of tabular data generated by the UEDGE edge fluid code.

TGYRO is a transport solver based on the drift-ordering formulation of Sugama. This formulation is by far the most complete and rigourous formulation of the core transport equations (for axisymmetric plasmas). TGYRO requires a core turbulence flux component (from TGLF or GYRO). and a core neoclassical flux component (from NEO code). Finally, electron and ions auxiliary heating sources are required. These are supplemented with self-consistent calculations of electron radiation and thermonuclear heating to ions and electrons. TGYRO is a steady-state solver so can in principle take arbitrarily large time steps, but the time-dependent capability is best managed by OMFIT. The TGYRO capability to invoke multiple instances of GYRO is a key capability for usage of leadership resources. In addition to the parallelism of the component (say GYRO) TGYRO will also parallelize over radial zone (8-16 are typically needed) and Jacobian. This means a factor of about 64 over the parallelism of the turbulence component.

TGLF is a theory-based transport model based on linear gyrofluid equations plus “calibration” with a database of GYRO nonlinear simulations. In some sense, the goal of TGLF is to provide an answer as close as possible to that one would obtain from GYRO but more quickly (10,000 times or more). In some sense, practical performance modeling MUST use TGLF. To my knowledge TGLF is far superior to any other transport model. It is a significant improvement on its predecesor GLF23, especially in the weak or negative shear regime and for strongly shaped plasmas.

NEO is a \(\large \delta f\) Eulerian code which provides first-principles based numerical calculations of the neoclassical transport (particle flux, energy flux, bootstrap current, poloidal flows, etc.). NEO solves a hierarchy of equations derived by expanding the drift-kinetic equation in powers of , the ratio of the ion gyroradius to the system size. NEO includes the self-consistent coupling of electrons and multiple ion species via complete cross-species collisional coupling, the calculation of the first-order electrostatic potential via coupling with the Poisson equation, general geometry effects, and rapid toroidal rotation effects (including centrifugal effects). NEO has recently been upgraded to include the full linearized Fokker-Planck collision operator.

EPED is a model to predict the height (ie pressure, or temperature at a given density) and width of the H-Mode pedestal in tokamaks. It predicts a boundary condition (near the top of the pedestal, typical psi_norm~0.9-0.95) that can be coupled to a core transport solver such as TGYRO to predict profiles across the confined plasma. EPED is designed to predict the pedestal structure in “high performance” H-mode operation (ie Type I ELM or QH-Mode regime), and typically provides an upper bound in other regimes of operation. EPED can be applied to existing experiments, future experiments on existing devices, or to predict and optimize future devices such as ITER or FNSF. EPED has been tested on more than 300 cases on 5 tokamaks, typically finding agreement with observations to a standard deviation of ~20%. EPED first calculates a kinetic ballooning mode constraint using series of model equilibria from toq and stability calculations from baloo (or in the future, GYRO or TGLF), and then calculates a peeling-ballooning mode stability constraint using model equilibria from toq and stability calculations with ELITE. The two constraints are combined to determine the two unknowns, pedestal height and width.

BOUT++ is a framework for writing fluid and plasma simulations in curvilinear geometry. It is intended to be quite modular, with a variety of numerical methods and time-integration solvers available. BOUT++ is primarily designed and tested with reduced plasma fluid models in mind, but it can evolve any number of equations, with equations appearing in a readable form.

OMAS is a Python library designed to simplify the interface of third-party codes with the ITER Integrated Modeling and Analysis Suite (IMAS) . ITER IMAS defines a data model, a data get/put API, and a data storage infrastructure used for manipulating ITER data.

At the heart of OMAS is the idea of providing a convenient API which can store data in a format that is compatible with the IMAS data model, but using other storage systems in addition to the one provided by IMAS itself. Within OMAS data compatible with the IMAS data model is easily translated between these different storage systems. Furthermore, any physics code or programming language that is capable of reading/writing data using one of the many OMAS supported data formats (eg. NetCDF) can take advantage of the functionalities provided by OMAS.

The harvest project aims at providing a convenient and scalable way to log metadata and store data for fusion applications.